Home » B. Dolan wants you to find your purpose 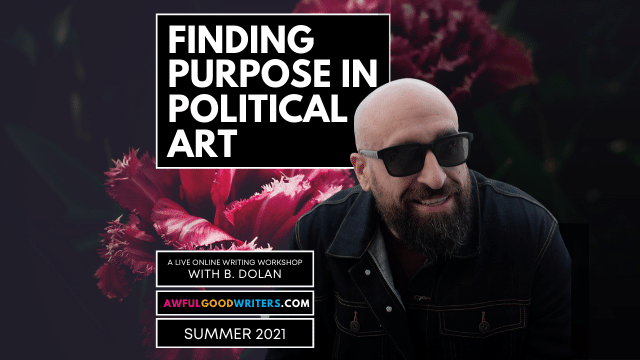 “What is the purpose of Political Art?“

For more than 20 years, that question has been circling in my brain as a writer, activist, and performer.

When I was 18 I attended my first protest, in what felt then like an instinctual response to the murder of Amadou Diallo by the NYPD. The unarmed man had been shot 41 times.  I heard the story and landed in the street with thousands of others, calling on Mayor Rudy Giuliani to fire the cops.

A year later, I experienced 9/11 in New York, followed by the renewed rise of far-right nationalism and the start of America’s longest war. Through it all, I have been protesting and internally struggling with the place of my art and creativity in all of it.

While I’d already determined to be a writer and my political feelings were powerful and distracting, I also felt artistically critical of much of the political art I heard … even from the people I agreed with politically! At every open mic I saw people using political sloganeering as a shortcut to make the crowd “pop”.

Was there ANY purpose to writing a poem or song about these political topics, unless I was the person directly affected?  If Chuck D or Bob Marley didn’t write the song that changed the world, what were the odds I could? Should a white cis-male writer like me even address politics in my work? What were MY politics and realities, exactly? Where was my place in these stories that so deeply affected me on an emotional level … and where was my place within the movement?

I approached my own art like a skeptic, in the face of evidence that the world was hurtling toward disaster faster than any poem would catch it.

At times, I created some extremely anti-social experimental art. At other times, I abandoned art and engaged fully as an activist.

I studied from and built with organizers engaged in the environmental movement, workers rights struggles, police & prison abolition, and more. I first became known to some as a muck-raking journalist. I did deep background research (leading to depositions against former CEOs) and wrote editorials, foregoing poems and songs. I experienced burnout. I regrouped and came back with a different approach.

In 2012, a piece of musical activism I created would lead to viral success as a newly coined ‘political’ rapper, bringing me around the world to meet with protest kids and like-minded people. I created a viral hashtag or two and leveraged them to raise money for important causes. I witnessed power and influence within the music industry, and the effect it has on political voices and community. I learned first hand about the intersectional nature of activist struggles and our common enemies, and the place of writing and music within those struggles.

Finding Purpose in Political Art will offer an overview of what I see as common challenges in creating, labeling, and approaching political art. This course will help writers locate themselves within the political conversations being had, and reckon with the ultimately personal nature of giving voice to this type of material.

No topics will be off-limits, and we’ll keep an eye out for hypocrisy and blowhard-ism within the entertainment profession.

It’s my hope that those enrolled will come away with a wider perspective of political art, and a deeper understanding of their personal relationship to it as a creative and engaged human being.

B. Dolan: Finding Purpose in Political Art will be held live on Thursdays at 3PM PST, starting July 22 and running through August 12.

Students will have exclusive access to Q&A, coaching/feedback for writing and performance, and private discussion groups. Students are welcome to join at any time; all classes are recorded and available for viewing up to one month after the class end.

B. Dolan is an American rapper, spoken word artist, activist, and screenwriter based in Providence, Rhode Island. As a musician, he’s the composer of five LPs (released by Strange Famous Records and Speech Development in Europe), as well as the independently released “House of Bees” mixtape series and “We Show Up” Live album with Buddy Peace. His most recent LP is the instrumental score for the film “VAULT”, a Lionsgate film he received co-writing credit for.

Ben Yisrael wants you to turn your challenges into gold