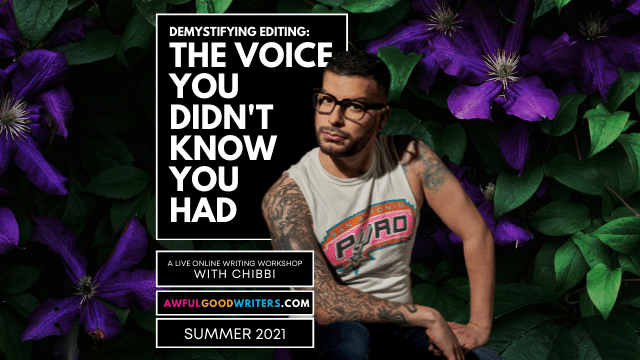 Chibbi is a successful spoken word poet, actor, and artist who has been performing poetry since 2006. He is also the founder of Laredo BorderSlam, a founding member of Write About Now, and the Executive Director and co-host of the virtual talk show and podcast, Words and Shit.

Chibbi spoke with AGW’s Poet Astrid about his work, his writing, and his AGW course Demystifying Editing – The Voice You Didn’t Know You Had.

Chibbi grew up in Laredo, TX, as a queer Latino born in Guadalajara, Mexico.

“With that comes a lot of Catholic guilt,” he laughed, “but I was like ‘Well fuck it. I’m me and that’s just not going to change’.”

During his junior year of high school, Chibbi set out on a mission to graduate early and attend college in Austin, TX.

“It was the only progressive island of Texas,” he said. “It’s just more liberal and free, where everyone has this mentality of ‘As long as you’re not hurting anybody then you’re cool.’”

Well fuck it. I’m me and that’s just not going to change.”

– Chibbi, on growing up queer and Latino in Texas

Here, Chibbi discovered poetry as an avenue where he could write and perform his own script. This was revolutionary for him, as it completely contradicted the poets he learned about in high school, such as Robert Frost and Shakespeare.

“I discovered what poetry was and what spoken word could be when the two lived side by side,” Chibbi said.

However, while in Austin, Chibbi also experienced tokenism in a way he had never experienced in Laredo, where the population was predominantly Mexican and Mexican-American. He soon began to realize his identity, culture, and hometown deserved to be embraced and celebrated, rather than something he should steer away from.

“All I wanted to be was as American as possible,” he explained. “When I moved out of Laredo and realized how different my culture and experiences were, I started to connect with my culture and Mexican-American self a lot more.”

“A lot of editing is tearing the poems apart to build them back up and realizing ‘I didn’t know I could do that with my work. This is a way to help people progress after their instinctual writing, to elevate their voice and turn it into poetry.”

Chibbi eventually moved back to Laredo after being in rehab due to a heroin addiction for many years. He quickly realized there were no creative spaces near his home, so he decided to launch his first open mic and create a performance scene to keep busy and stay sober.

“It became less of ‘I do poetry for fun’ to ‘I’m more of an organizer now and part of the community,’” he reflected.

Chibbi’s work in the creative community continues through his latest workshop with AGW: Demystifying Editing – The Voice You Didn’t Know You Had.

“To me the workshop is about discovering the poem, then comes the process of discovering what you were really trying to say,” Chibbi noted. “A lot of that comes from navigating around the poem and letting it speak for itself. You later discover the poem takes on its own voice.”

True to its title, the workshop will also place a high emphasis on the importance of editing.

“A lot of editing is tearing the poems apart to build them back up and realizing ‘I didn’t know I could do that with my work’,” Chibbi explained. “This is a way to help people progress after their instinctual writing, to elevate their voice and turn it into poetry.”

Chibbi: Demystifying Editing – The Voice You Didn’t Know You Had will be held live on Sundays at 3PM PST, starting July 18 and running through August 8. Students can look forward to discussing their work, editing for content and form, as well as generating a new poem from start to finish.

Students will have exclusive access to Q&A, coaching/feedback for writing and performance, and private discussion groups. Those wishing to enroll are welcome to join at any time; all classes are recorded and available for viewing up to one month after the class end.

Astrid is a Salvadoran-American poet and journalist based in Los Angeles. She earned a Bachelor’s Degree in Business Administration from California State University, Dominguez Hills. She lives in Long Beach and shares her editorial voice at L.A. Taco, an independent press covering the native Los Angeles community. Her work has also been featured at Viva La Muxer and Cultural Weekly.

Ben Yisrael wants you to turn your challenges into gold